The first time I ran this race was back in 2014, less than a year from when I started running.  At that time, it was probably the hardest thing physically that I have ever done. I remember at the end feeling like I was going to die.  So, of course I’ve had to come back every year since.

Leading up to the race, I wasn’t too sure how things were going to go.  I continue to deal with a moderate flare up of my UC, and I am still trying to avoid steroids.  Over the past few weeks, I got into a rut and started feeling a bit sorry for myself.  However, a few things occurred recently to help me overcome those feelings.  First, while out on a lunch run with my friend Zach, I started feeling very weak and thought I might have to stop and walk back to the office.  At that point, Zach said something very simple but it made a huge difference.  He simply said, “you need to put things into perspective, it can always be worse”.  Zach is always very positive, and in the short time I have known him he’s made a major impact on the way I think.  Second, I saw a Facebook post from my friend Chad who has a similar disease to mine called Crohn’s.  This post was a picture of a hospital bed where he would be spending the next few days getting help with a bad flare up.  Zach was right, things certainly could be worse.  It was time to end the nonsense of feeling sorry for myself right then and there.

I decided I needed to set some sort of a goal for the race.  The first year I ran it, I finished in 1:16:23 in some very poor conditions.  Last year was 1:04:24.  So this year, I thought I would push for under an hour, not really knowing if that would be possible. This is a very tough course with over 1500 of elevation gain.  That’s an average of 227 feet of climbing per mile.  No wonder my calves are so sore as I sit here typing!

Race morning came and the weather was beautiful.  It was going to be sunny with temps around 40 degrees at the start.  Since my nutritionist was no longer letting me eat my Special K protein bars for breakfast, I had to try something new.  I ended up having a banana along with some Honey Stinger organic energy chews.  Of course the morning included my 4-5 trips to the bathroom before leaving the house.  I headed out the door knowing that I’d make my typical stop at the Turkey Hill mini market on the way to use their bathroom as well.  I arrived at the race, located at the Reading Liederkranz (look it up, it’s a pretty neat place), and went inside to get my bib.  I took my bib to my car and decided to use the restroom again before I did a warm up run.  I headed out for a mile warm up and ran into an older gentleman named Nick.  We ran together and chatted a bit. He seemed very nice and he was wearing a Pearl Izumi tech shirt :).  I got back to the car, pinned my bib on, and hit an old porta john that looked like it may not be in service any longer. This thing was pretty scary and was filled with cobwebs.  I then headed to the start line which is about a .2 mile walk from where you park.

At the start, the race director gave the typical instructions and then everyone sang Happy Birthday to him.  That whole process took several minutes and I was anxious to get things going.  Finally, the race began.  I knew that about .4 miles in, there was a hill that requires you to bush wack and if you get stuck behind a lot of people it can really slow you down, so I wanted to start out fast.  I looked down a few times at my watch during that first .4 miles, which is downhill, and my pace was around 5:37.  I wanted to start out fast, not kill myself!  I slowed it down a bit and got passed by a handful of people, but I was still it good shape for the first climb.  I got to the hill and started to clamber up grabbing trees along the way to help.  One guy in front of me grabbed a small tree and totally uprooted the thing.  When we got to the top, there was an additional surprise.  A twelve foot pile of plowed snow to go up and over.  Once that was accomplished, there was about a .2 mile section of downhill on the road until heading into the woods for another climb.  This climb wasn’t too bad.  Maybe 100 feet over the next .5 mile until we reached a steep downhill which dropped about 200 feet in .2 miles.  In the past years, I didn’t realize how technical these trails were since they were always covered in snow.  I much preferred the downhills with the snow.  Over the next mile and a half, there would be about four climbs all followed by a fairly rapid descent.  It’s about the 3.2 mile mark where the climbing really becomes fun.  There you reach a climb that covers about 237 feet in .2 miles.  This is followed by a short descent and another steep climb until you hit the 4 mile mark.  It’s at this point where you can actually make up some time since the next mile is fairly flat.  I knew that I needed to be around a 9 minute per mile pace to break an hour and saw that I was now a little off of that.  I felt good, so I was able to kick it into gear.  I spent most of the race just racing against the clock versus caring about the people around me.  I ran that mile section in a 7:38 pace which got me back down to where I needed to be, but I also knew what lied ahead.  As I got to the bottom of the steepest climb on the course, I saw my friend Dave and his daughter watching and gave him a high five.  That gave me a little boost of energy.  I don’t typically see people I know out in the middle of the woods at a race.  I knew this was the final climb and it was all downhill from here.  I ran probably another 50 feet and then knew I had to power hike. This climb covers over 200 feet in just over .1 miles and includes some boulders.  Once at the top, it’s a short run on the road until the next trail head and 480 feet down over the next mile.  Some sections were a bit too steep and technical to really open it up, but I ran as hard as I could.  A short time into this last stretch, I started to feel like my left calf was going to cramp up.  Luckily I was able to get to the end without that happening. Once you hit the bottom of the descent, you are back to where the race started.  You go on the road and the same trail as the start, but then cut up a hill over the guardrail and across the road to one final steep incline to the finish.  At this point, I really wasn’t sure where I stood time wise since I really hadn’t been paying attention to my watch much over the last mile.  I reached the top of the climb and saw the finish clock reading 58 minutes and 30 some seconds.  I felt really good at this point and didn’t really run hard through the finish like I usually do.  I’m not sure why, but it just felt like the thing to do at that point.  I ended up finishing in 58:47, over a minute below my goal.  This put me in 14th place overall and 7th in my age group.  No hardware, but it was a competitive field.  They gave awards for the top 5 in each age group and all 5 in my group finished in the top 10.

I was very pleased with my result.  It was an exciting race for me, especially since it was the first race wearing my team jersey representing Pearl Izumi.  Each time I run, I fall more in love with their products.  My trail N2 verson 2’s were awesome on the technical terrain.  These are the only trail shoes I’ve owned that just disappear on my feet when I run.  I’m very excited to see what the rest of the year brings.  The Hyner View 25k is my next big race in April.  I’m not sure if I will run any other races between now and then or just focus on training. 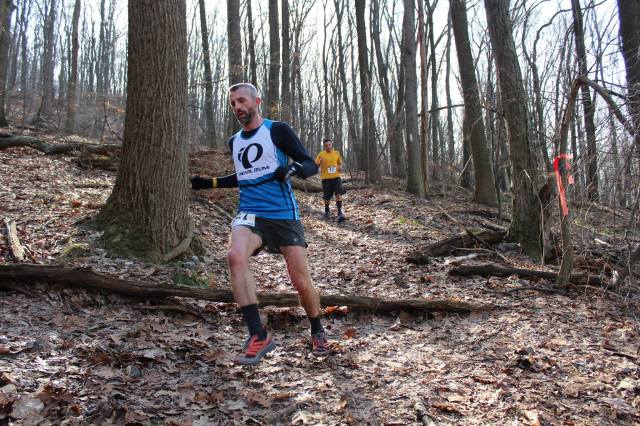