It’s been quite some time since my last post.  The beginning of the year started out a bit rough with probably my worst UC flare up that I’ve experienced.  I was prescribed the dreaded steroid’s that I’ve been successfully avoiding since I was diagnosed with the disease.  I took them for one day and then decided to try a diet called the “Cellular Healing Diet”.  This is a low carb, high fat diet that had me feeling so weak for the month that I was on it, that there were days that I could hardly get out of bed.  I am happy to say that I am now on the Specific Carbohydrate Diet which stopped my flare up and has me feeling healthier than I have in a while.  I plan to write another post with more detail on this experience in the near future, but for now I’d like to recap the one and only race that I actually felt healthy for so far this year.

The Hyner Challenge 25k was my biggest race of the year leading up to this point.  The lack of being able to train due to my health eliminated any goals of being competitive for that race.  So, now that I was feeling better, I wanted to find a race that I could actually train hard for and push myself.  I was really excited when I learned that there was going to be an inaugural trail half marathon in one of my favorite state parks, World’s End.  I quickly registered and reserved a campsite at the park.  Earlier this year, we bought a travel trailer and had a blast on several camping trips.  I figured it would be a nice family getaway for the weekend.

I sought the help of my coworker Zach Miller in putting together a training plan.  This isn’t the Zach Miller that you trail runners are familiar with, but he is a stud runner as well with a sub 15 minute 5k PR and 68 minute half marathon PR.  I also reached out to my Chiropractor, Ryan (Vermeesch Genesis Performance Chiropractic), and scheduled biweekly appointments to help with injury prevention.  With the help of these two, I had the best training block since I started running three and a half years ago.

Leading up to the race, it appeared that we were going to be in for some very wet weather.  I started having some second thoughts as to what shoes I would wear.  All of my training had been in Pearl Izumis, but I was not really confident in their ability to handle wet rocks which this course would have everywhere.  I decided to bring along a pair of Salomons, but ultimately went with the PI’s when Zach texted me that I was overthinking things.

Since my boys had an early dismissal the day before the race, I decided to take off work so that we could get an early start on the road.  We arrived at the campground around 4 p.m.  It was raining a bit and appeared that the rain had been going on for a few days based on how saturated things were.  I quickly got the camper set up and spoke to a neighbor who was racing as well.  It turns out that he lives a few miles up the road from me, so it was nice to meet someone new that is local.  I then drove to the race start to check things out.  I took a walk on the trails to see what the terrain would be like, and quickly realized that it was going to be dicey.  I headed back to the camper and we had dinner.  After that we decided to head over to the campground where my parents have a permanent site to visit.  This would be the first time that they would see me race.  We spent a little time there then headed back to go to bed.

On the morning of the race, I woke up and was glad to see that it wasn’t raining.  It was very cloudy and gloomy, but the rain managed to hold off until after I finished.  I got ready and planned to drive to registration and then come back so that I could run to the start as a warm up.  It was slightly over a mile from the campground.  Heading into the race, I wanted to set a goal, but it was difficult since there were no past results to look at.  I knew it wouldn’t be a fast race with over 3000 feet of climbing and super technical terrain, so I decided I would shoot for 2:30 or less and a top ten finish.

As I waited at the start line, I ran into Matt Lipsey.  Matt is a super nice guy and outstanding runner.  I knew that he would most likely win with ease, which ended up being the case with 22 minutes separating him from second place.  After a briefing and course instructions, we were on our way. 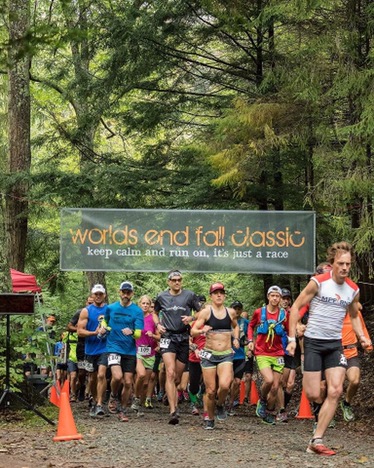 The race started out on a short section of road and then took a sharp left onto the first trail and first major climb.  I tried to stay up front as much as possible to hopefully avoid a conga line on that first climb.  It wasn’t too long into the climb that it became a power hike up some significant boulders.  Luckily my legs felt strong, and I was able to make some passes on this section without overexerting myself.  Once we got to the top of the climb, the trail looped back to where we entered and was all downhill.  The descent was quite slick and technical.  At this point I was running with a guy named Dylan from NY and the eventual women’s winner, Deserae.  Dylan and I passed her as she seemed to be quite timid on the descent.  Based on the size of her quads, I think climbing was probably her strength.

As we came out of the trailhead back on the road, another young guy joined us.  It was another short road section until we headed back onto a trail that ran along the river.  This was a tough section as there were large flat rocks that were wet.  A wrong foot placement could have easily landed you in the drink.  From here we crossed over the main park road and headed up another trail towards the campground where the first aid station was located around mile 5.  Shortly into the woods, a spectator announced that we were 5th through 8th.  All three of us passed another runner, and I heard him ask if we realized we still had 8 miles to go.  I am pretty sure he is a strong runner, but it turned out he had a rough day and ended up walking a bunch of miles.  The comment was probably due to a little frustration which I could understand.  When we hit the aid station, my wife was there to cheer me on.  My parents couldn’t get there since it required some hiking.  She informed me that I was in 6th place, which wasn’t accurate since I was 7th, and I filled up my handheld.  My fuel for this race was water and honey.  With my diet, I am completely sans sugar, so it makes most fuels off limits.  It wouldn’t be much longer until I learned that I’ve gotta come up with a better fueling plan.  I left the aid station and took off on the next less forgiving climb.  About a half mile into the climb, my right calf started cramping ever so slightly.  I continued to run and power hike until I got near the top.  I then started having cramping in both calves and had to stop and try to stretch them out.  At this point I was passed by a guy, and he offered me some tart cherry juice and mustard.  I passed on the offering, and he continued on.  I walked for a little and then was passed by Deserae.  I tried running a bit and taking in a bunch of honey.  I was able to stick with her and the cramping seemed to subside as we made our way through a rock garden and hit a descent. 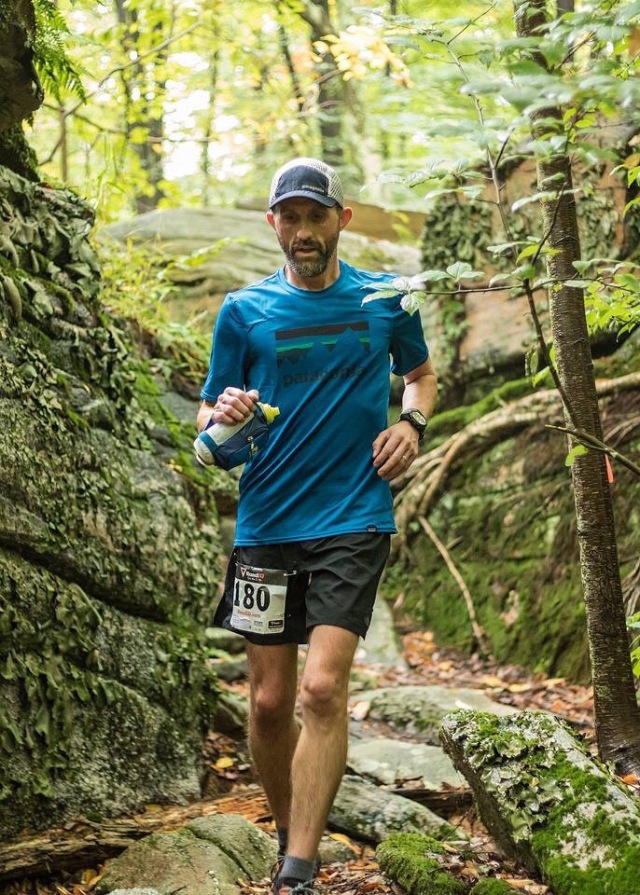 On the descent, I ended up getting passed again which put me in 10th place, right at the cusp of my goal.  At the bottom of the descent, we hit the road which would lead us on a climb to a beautiful overlook and the final aid station at about mile 10.  I was feeling pretty good on this climb and was gaining on the last two that passed me.  At the aid station I saw my wife, boys, and parents.  They informed me that I was in 10th like I thought.  I quickly got some more water and headed out leaving before 9th place and picking up that spot.  We were now left with a significant downhill stretch.  I was right on the tail of Deserae.  We came to a stream and momentarily were a little confused as to which direction to go since there were yellows flags leading one way.  Luckily she ran a 50k there not long ago and figured it out for us.  Not long after that, the calf cramps came back again and it slowed me down significantly.  I got passed by 10th place, and he and Deserae were shortly out of sight.  With about a mile left, I looked back and noticed that someone else was gaining on me.  At this point, it appeared that 2:30 would not be possible, but there was no way I was going to lose the top ten finish.  I found another gear and battled through the pain to the finish.  I ended up 1oth overall with a 2:34:34.37.

Overall, I was pretty happy with the results.  There was some frustration with the calf issues and the thought that I would have met both of my goals had they not occurred.  It was a good learning experience, and I know now that I need to work some electrolytes into my nutrition.  Despite some of the issues and the rough terrain, this was a very fun race.  I can definitely see myself going back next year.

As for the rest of the year, I plan to take it a bit easy and enjoy running and mtb riding.  I may do another trail race at the end of November, but most of our weekends are booked with my son’s MTB races, and Ice Hockey.