This was my third trip to the Hyner View Trail Challenge 25K.  I wasn’t sure what to expect going into this year’s race.  I trained harder than ever before and put in my biggest week ever with 50 miles and over 10,000 feet of climbing two weeks prior to race day.  I knew my legs and fitness were prepared, however, my gut was the unknown.  Leading up to the race, I have been battling with the longest flare up of my UC that I’ve ever experienced.  It has been five months of bleeding and attempts at several different medications that have all failed.  I had some issues during my last few training runs and was a bit nervous that my race was going to be jeopardized by GI issues.

Since signing up for my first Hyner, the goal that I’ve always had was to run sub 3 hours.  Out of the approximate 1000 runners registered each year, there are typically about 35 that finish in under 3 hours.  This has always felt like a goal that wouldn’t be easy, but was within reach.  In 2016, with next to no training, I finished in 3:32.  My 2017 result was much better at 3:07.  It was going to definitely be a challenge to knock another 8 minutes off of last year’s time.

We left home Friday morning and headed to my parents house to pick up our camper where it is being temporarily stored.  It’s about a 2.5 hour drive to their place and then another 2 hours to Hyner from there.  The weather was a bit chilly and windy.  It always makes the trip a little more interesting when it’s windy pulling a 26 foot camper.  Colin has been getting car sick as of late, so we filled him up with Dramamine which knocked him out.  We were hoping that this year would be the break of the “Colin getting sick in the middle of the night Hyner curse”.  The last two years I have been awakened in the early morning hours of race day to the sounds of him puking.  That made for a very stressful race in the past.  Well, spoiler alert, he made it without getting sick.  This was the first sign to me that things were going to go well.  We arrived at Hyner Run State Park shortly after 3 p.m. and got the camper set up.  There were several fisherman camping and apparently the previous tenant of our site decided to leave us a gift of fish carcasses in our fire pit.  Not necessarily a good thing when you are staying in bear country.  Lisa tackled the fun job of cleaning up.  She received somewhat of an award for her hard work when one of our neighbors gave us a few nice sized trout for dinner.  After we were done setting up, we headed to registration.  I ran into Dan and Preston and talked to them for a while.  Lisa was excited to find a pair of used trail shoes from Revibe Gear at the registration.  They are a neat organization that sells slightly used gear and uses some of the profits for programs to get kids outdoors.  After registration, we headed up to Hyner View.  As usual, it was quite windy at the top.  We spent some time taking in the views and chatting with a few folks and headed back to the campground.  As I was passing a power line right before the campground entrance, I caught something out of the corner of my eye and decided to turn around to see what it was.  In the middle of the pipeline, pretty far up was a nice sized black bear.  This was pretty cool!  As many times as we’ve been camping and in the woods, we’ve never seen a bear before.  We watched it for a while and then went to our site.  A few friends were camping as well, so I told them about the bear and we all took a walk to see it.  It must have hung out on the pipeline for a good hour or so.  I was glad that Lisa got the fish guts cleaned up!  We hung out for a while, had dinner, and then it was time for bed.

I woke up race morning feeling like I got a pretty good night of sleep.  I got a warm shower to wake up the muscle’s, did my typical several morning bathroom runs, and then had Lisa drop me off at the start.  I got there just in time to run into Dan and saw the start of the 50k.  Preston and Derek were both running the 50k and I was glad I got to see them take off.  It was a little chilly in the morning, but the weather was just about perfect.  After a couple trips to the porta-john, it was time for the 25K start.  I headed towards the front of the start with about a minute to spare.

The race started and I headed out probably faster than I should.  I knew I had to be somewhat towards the front so that I didn’t get caught up in a line when we hit the trail head.  At the first mile split, I saw that I was slightly faster than last year at a 6:34 pace.  Going out a little quicker paid off as my second mile split was faster as well since I avoided any bottle necks.  At just over the 4 mile mark, you reach the top of Hyner View.  This is always a fun spot since it’s really the only place on course for spectators.  I reached the top and Lisa was there as usual taking photos.  She let me know that I was about 10 minutes ahead of last year’s pace.  I was quite surprised and started to realize that all that climbing in training paid off.  I quickly removed my arm sleeves and tossed them to her.  This has been somewhat of an annual ritual for me.  Start out cold, but by the time I reach that first summit, the body is plenty warm.  I jogged through the first aid station and started the first descent to Reickert Hollow.  This section heading into Johnson Run is the wettest on the course.  There are several water crossings and it’s in this section where I felt like I lost a lot of time last year.  The water was frigid, but it felt good splashing on my legs that were already sore.  I knew where my pace needed to be and spent time checking my watch to make sure I was on target.  This section went much better this year.  I was keeping my nutrition in check and making sure to take a Honeystinger gel every 45 minutes.  I also added salt sticks this year every hour, hoping it would help to fend off any cramping.  As I ascended Johnson Run, I felt my calves start to cramp ever so slightly.  I reached the summit, refilled my water bottle at the aid station, and headed down Post Draft.  For some reason, I completely forgot about this section.  This is a technical descent with lots of off camber rocks.  With the slight cramping in my calves, I did not want to push it too hard on this downhill in fear that they would seize up.  Looking back, the descents are something that I can work on for the future.  I definitely gave up some time and spots in those sections.  Going into the last climb up SOB, I knew that I wanted about a 30 minute cushion for the last 3 miles to get to the finish under 3 hours.  I got to the top of SOB right around 2:12 and as usual everything started to cramp a bit more.  This is always frustrating as the next 2 miles are a very runnable section on what I would describe as a jeep road.  I hit the 13 mile mark at about 2:27:30 and started feeling extremely confident that I was going to hit my goal.  Shortly after, I started the descent of Huff Run to the road leading to the finish line.  I held back a little knowing I had enough time and still being cautious to avoid any seizing up of my legs.  I got passed by a few people on this final descent, but didn’t really care as the only thing I was racing was the clock.  I hit the road and had about a mile left to go.  I looked down at my watch and knew now that my goal was going to be accomplished and it wasn’t going to be too close.  At this point, I actually started to feel a bit emotional.  I think it was a combination of knowing how much work I put into this race along with the struggles that I’ve faced over the past 5 months.  I hit the end of the bridge, made the turn onto the dirt road leading to the last single track climb to the finish.  Colin was waiting at the bottom of the climb and it was a wonderful feeling seeing him there waiting for me.  I yelled to him that I was going to make it and he took off to the finish to see me there.  I spent a few moments power hiking, and then ran up to the finish.  Lisa was there yelling for me and hugged me as soon as I crossed the line.  I looked at the clock and the time was 2:53:36.  Not only did I hit my goal, but I did better than I would have even imagined.  I ended up 27th overall out of 854 finishers.  Aside from a few little cramping issues, I could not have asked for a better day.  The weather was perfect, nutrition was on point, and my stomach held up.

We spent a few hours hanging around the finish line chowing down on the awesome bbq chicken while the boys found some other kids to play with.  I got to see the rest of my friend’s finish their races and spent some time sharing war stories.  The perfect day for sure!

I wasn’t sure what I would do once I hit my goal of a sub 3 hour finish.  Would I go back?  Would there be anything more to accomplish?  Any doubts were quickly diminished when Lisa and the boys said that we have to come back next year.  This has become a family tradition and was such great trip this year that we can’t stop now.  Lisa and the boys have even started some discussions of possibly hiking the race next year.  Not sure if that will happen, but see you in 2019 Hyner! 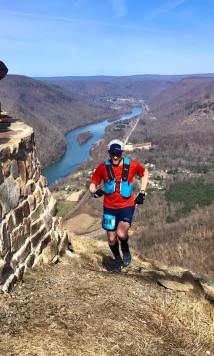 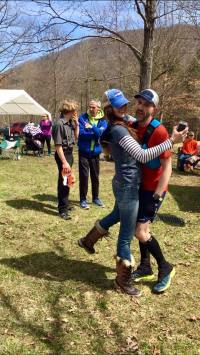 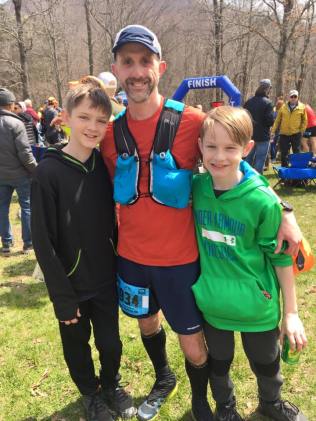 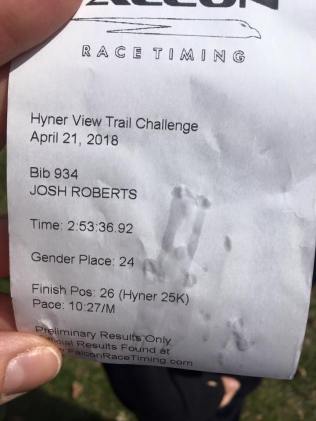